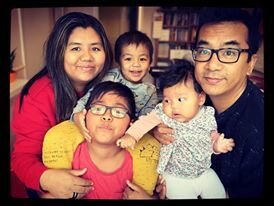 Open Door Church Sunbury has opened Commission’s first 2nd-language congregation. Encounter Worship Centre is led by Paul Piang (known as ‘Piang’) and his wife Khawm Hui and they meet every Sunday afternoon at the Open Door Church Centre to worship, teach and fellowship together in Burmese.

There have been a number of Burmese believers in Open Door Church for about eight years, having been saved through the ESOL classes that run twice a week. Through one of our Church members, a Burmese believer, we got to know Piang who subsequently got to know several key leaders within Commission; attending the Foundations Course and Westpoint Festival.

This group will allow Burmese believers to worship in their ‘mother tongue’ and receive teaching from the bible in their heart language. It will also empower them to live as a Burmese person in the UK and seek to reach out to Burmese speaking people all around the London area. They will also be a catalyst to further outreach to internationals through Open Door Church and its ESOL classes.

As London is the most ethnically diverse city in the world, this venture will be the first of many in London-based Commission churches that seek to “reach the nations in their Jerusalem”.